Appointments to the Supreme Court, or the Assumption of Sumption's Ascension 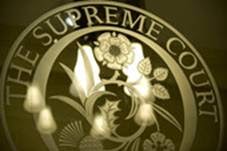 The burqa ban in France

On 11 April a new law took effect in France, banning the wearing of the burqa in public. Though there are no plans for any equivalent law in Britain, it would be idle to pretend the controversy has no relevance here.
At first sight it seems absurd that the state should regulate what clothing people choose to wear. Freedom of expression and freedom of religion require – as a strong starting point at least – the ability to display religious symbols and comply with religious tenets as to dress in public.

As ever, things are not that simple. The British state already regulates what people wear in public, for example by precluding indecently exposure. The limits of that regulation are always disputed but there is no argument for it to be repealed in toto. Further, wearing clothes with racist or otherwise offensive slogans might attract a public order prosecution. Accordingly, banning the burqa in public would not be a wholly unprecedented measure.

Whilst many might wear the burqa voluntarily, both by way of adherence to their religion and perhaps also a rejection of the oversexualisation of women in Western society, others may be forced to wear it. The new French law acknowledges the difference between the two situations: the wearer will face a fine of €450 and/or a course in “citizenship”, but a man who forces a woman to become a wearer will incur a fine of €30,000 and imprisonment. One would presume in the latter situation that there would be no prosecution of the woman.

It is not relevant that very few women (under 2,000 according to this report) actually wear the burqa in France (though if anything that is a reason in favour of the ban). Nor is the French government’s actual motivation for the ban (the subject of some speculation) relevant to whether it is morally justifiable or not.

All that said, I see no case at present for a ban in the UK. The main problem is that there are no cogent statistics showing how many women wear the item voluntarily as opposed to under duress. Given the inherent difficulties in compiling any such statistics (someone in an abusive relationship will probably not feel able to answer freely, even in an anonymous survey) it would seem unlikely there ever will be – though if anything that lends support to a ban. More importantly, however, anyone in an oppressive relationship will not be saved from abuse simply by the law preventing her from wearing a burqa in public – indeed, it risks making her a criminal as well as a victim. There is certainly a justification for the state acting against an oppressive husband who forces his wife to wear the burqa, but a burqa ban will not of itself release anyone from oppression and in any event there are already laws against domestic abuse, as well as private and public forms of assistance for its victims.

Arguments about whether the Koran really does mandate the wearing of the burqa or whether the item is simply a manifestation of extremism or a non-religious cultural practice do not settle the issue. The state is not in a position to adjudicate theological disputes, and freedom of religion precludes it from doing so in any event.

In essence, if a woman has been forced to wear the burqa by an oppressive husband she should have the right and the means (provided by the state) to leave that relationship if she wishes. If she has chosen to wear it voluntarily, her motivation – religious, cultural, fashion or other – is no-one else’s business. The resources of the state should be directed at identifying and addressing domestic abuse, not arresting people on a speculative basis because of their clothing.

Notwithstanding the above conclusion, there are particular circumstances in which both the state and private entities can and should ban the burqa (and various other items of clothing, both religious and non-religious). First, state schools should be permitted to ban religious clothing as part of the separation of church and state.

Secondly, banks, airports and other places with serious security concerns should be entitled to require burqas to be removed on their premises, as they do for anything else covering the face such as motorcycle helmets.

Thirdly, the rule of open justice – a cornerstone of the common law – should trump the right to wear a burqa. Accordingly, a witness may not insist on wearing the burqa whilst giving evidence, nor should the court be cleared whilst she is doing so. The present guidance to the contrary is, I suggest, unlawful.

Finally, I would hesitate before condemning the French, despite disagreeing with the ban. There is much to be admired in the French concept of laïcité, as foreshadowed by what I have written in earlier posts about law and religion. As a manifestation of that concept a ban may well be more justifiable.

Posted by James Wilson at 00:05 No comments:

Religion and the law: squaring the circle

Mr Aiden O’Neill QC has written a counterpoint to recent developments in law and religion, a subject on which I have written several recent posts. His view deserves a response.

Mr O’Neill summaries the present state of the law as follows:

He criticises this approach on the basis that there is a distinction between informed religious beliefs and secular beliefs; the former, he argues, are “intimately tied into the moral values to which [the religious] would adhere, by word and deed. Failing to act on those beliefs is not an option for the religious, because a failure so to act expresses for them a denial of their beliefs.”

There are several responses. First, it would be of small consolation to someone on the receiving end of what would otherwise be unlawful discrimination to be told that the discriminator was sincerely following a prescribed moral code. I doubt, for example, whether someone deemed untouchable by hardline adherents of the Hindu caste system, or excluded by followers of the former Dutch Reform Church, would have any sympathy for Mr O’Neill QC’s views. That those are extreme examples does not change the fundamental principle of non-discrimination.

Secondly, while it is true that some religious people who have been in the courts recently may have been genuine adherents of a mainstream religion who were acting according to deeply held beliefs, others seeking a religious-based exemption from anti-discrimination laws might simply be religious adherents of convenience, who offer a religious belief as a straw defence to justify bigotry held on other grounds. The courts are ill-equipped to judge anyone’s piety.

Thirdly, one would also have to define a religion, another exercise courts are not well placed to undertake.

Fourthly, there would have to be a list of acceptable or unacceptable religious beliefs for the purposes of legal exemption. No-one would support on religious grounds stoning someone to death for adultery, or withdrawing a female child from education, or forced marriages, or female genital mutilation. But compiling such a list would be an invidious task and bound to be over or under-inclusive. Alternatively, some principles would have to be formulated for the courts to implement on a case by case basis, which would likely lead to unacceptable uncertainty.

Mr O’Neill argues that, on his analysis, being religious is akin to having a disability: the law requires that account be taken of disability and appropriate measures taken to place the disabled on an equal footing with those without that disability. He says the same should occur for religions. The analogy is false. For a start, there is no choice about having a disability, whereas people often abandon or otherwise modify their religious beliefs.

Mr O’Neill would doubtless respond that for many it is not at all possible to change their beliefs, still less is it reasonable for the law to require them to do so. Yet the analogy still does not hold up: there is nothing about having a disability which affects anyone else’s rights, still less anyone else’s right not to be discriminated against. One person having a disability is totally irrelevant to anyone else’s right not to be discriminated against on the ground of race, gender, age or sexual orientation, for example – no reasonable adjustment would have anything to do with those grounds.

Underlying Mr O’Neill’s thesis is the assumption that religious beliefs are of a different nature to secular beliefs of any form and, he inevitably has to argue, somehow more deserving of the law’s protection. He contends that “there can be no proper comparison between those who would discriminate on grounds of a religiously informed conscience, and those who so act simply from unthinking incoherent prejudice or bigotry.”

This argument is not sustainable. Some religions might constitute deeply held belief systems with centuries of provenance. Others might be bizarre and extremist offshoots. Recent cases have shown the difficulties inherent in distinguishing one from the other. Moreover, someone might write a scholarly thesis on the dangers of religion and seek to exclude religious people from their public establishment accordingly – not all who discriminate on secular grounds are unthinking bigots.

The overarching principle regarding religion and the law is that one is entitled to respect for the right to hold beliefs, but not those beliefs themselves. Just because a person is entitled to hold a belief does not mean that another person has to pay for it, or suffer unlawful discrimination because of it.
Posted by James Wilson at 17:24 No comments: